Television actor Manmeet Grewal‘s suicide has thrown light on the plight of actors not being able to make ends meet due to the rising financial crisis amidst the lockdown. With the production of serials stopped and shoots being halted indefinitely owing to the Coronavirus scare many actors are out of work now.

Nia Sharma offered condolences to Manmeet’s family and also highlighted how non-payment of dues is severely affecting actors and daily wagers in the industry.

Expressing her sorrow over Manmeet’s drastic step, Nia took to her Instagram and wrote, “Not that I knew him, but the news about his suicide owing to his financial crisis is disturbing! (Needless to mention Migrants’ plight in the news every day) Now, was he the only one going through it? No! Every living being is. I know many of my friends (Actors) that haven’t been paid since last year or more with rents and EMIs mounting, work this year clearly being halted indefinitely, everyone’s losing patience somewhere.”

Highlighting the plight of the actors and issue of non-payment of dues by the producers, Nia went on to add, “I know, Producers have bigger risks and problems to deal with. no clarity on the industry resuming Work anytime soon, but still keeping up with the salaries of their huge staff, I totally respect that! In fact, would thank them for generating thousands of jobs for us through the years, I could make a better life here. On that note, I’d just like to make a humble request on behalf of my fellow actors/ friends, other daily wagers that their dues be paid asap especially at a time when they need it the most so that we’re not waking up to more such Suicide Stories a few days or a month later!! I wish to be financially so strong one day that I myself could help people around. I rest my note.”

Praising the actress for sharing this post, her ‘Naagin’ co-star Vijayendra Kumeria commented, “Nia respect you for posting this🤗🤗🤗… it’s so bloody true… actors and technicians are not getting paid their hard-earned money for projects they did even much before the ‘pre-covid’ times… it’s shameful that some producers are using Corona and lockdown as an excuse for non-payment. it’s really sad to hear such news..about people ending their lives due to financial crisis… just hope that we don’t get such terrible news more often in the near future.” 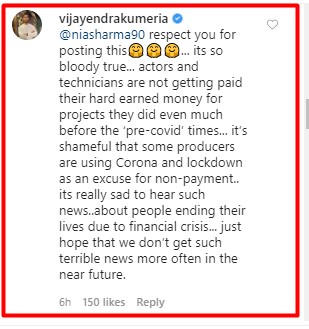 And actress Achint Kaur commented, “It is so sad. Everything is so intertwined and no one is actually at fault. By the time we all figure out how to move ahead. I actually pray people have the strength and will to survive. May he rest in peace.🙏🏼” 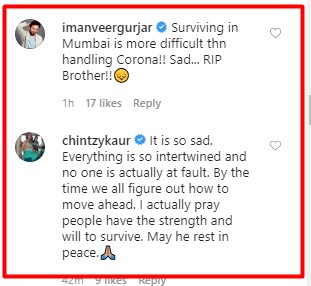 32-year-old Manmeet is survived by his parents and wife. After his death, even the cast and crew of ‘Humari Bahu Silk’ threatened to commit suicide over non-payment of their dues.