Actor Indraneil Sengupta received criticism on social media after he called his own wife Barkha Sengupta “owner’s pride”. Taking to his Instagram handle, Indraneil shared a silhouette of his wife Barkha standing at the balcony with her back facing towards the camera. Barkha is seen wearing a black dress in the picture. Sharing the picture, Indraneil captioned it, “Neighbours’ envy, owner’s pride @barkhasengupta.”

This post didn’t go well with a female user and she slammed him for ‘objectifying women’. She wrote, “Was looking for the leash on her neck from the owner…Intellectual captions are rare, definitely onida had it… sadly not all does!” to which Indraneil gave a reply in a fun way saying, “hahaha I knew the ‘owner’ would draw some flak, but it’s just a fun use of the popular line.”

Have a look at the user’s comment and Indraneil’s reply. 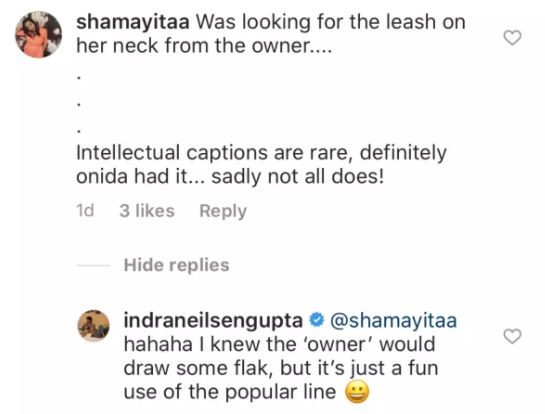 The female user who commented on the caption didn’t find humour in his caption. She further wrote, “I definitely tried to find the fun but maybe I lack a good sense of humour. Or maybe in my own way I am trying to resent the idea of women being as addressed as an object that needs ownership. Your words matter more than my words, I would request you to use them wisely since we (women) have a different battle to fight everyday, and sometimes a little hand of help matters more #thankyou.”

What do you have to say about Indraneil’s caption? Do let us know.

Also Read: Barkha Sengupta on Shivlekh Singh’s death: I don’t have the courage to talk to his parents