Chahatt Khanna furious at trolls for slamming her for being a single mother; hits back at them & deletes her Instagram

Chahatt Khanna, who is a single mother to two daughters has been on the receiving end of the wrath of trolls on social media. She was brutally slammed for being

Chahatt Khanna, who is a single mother to two daughters has been on the receiving end of the wrath of trolls on social media. She was brutally slammed for being a single mother. But she has the fighting spirit of a mother, after all, so Chahatt hit back at them with the most razor-sharp reply.

Chahatt took to her Instagram stories to give a smashing reply to all the trolls who slammed her for being a single mother, she wrote, “Witches and b***hes who can never get love, bf or family in life, forget about kids, they will never understand that kids are a blessing and not a liability, or target to put a woman down. Khuda unko hi bachchon se nawajta hai jinki haisiyat aur kismat hoti hai. Main toh phir bhi theek ho jaungi, tumhari beemari ka kya hoga (God only blesses them with children, who have the status and good luck for it. I will still be okay, how will you be cured of your illness)? (sic).”

Chahatt also confessed that she was in depression, she wrote in another story, “Hum zara depression mein kya chale gaya, unko laga ki hum mar gaye? Naah (Just because I went into depression, these people thought I was dead? No)! (sic).”

Check out the full story below: 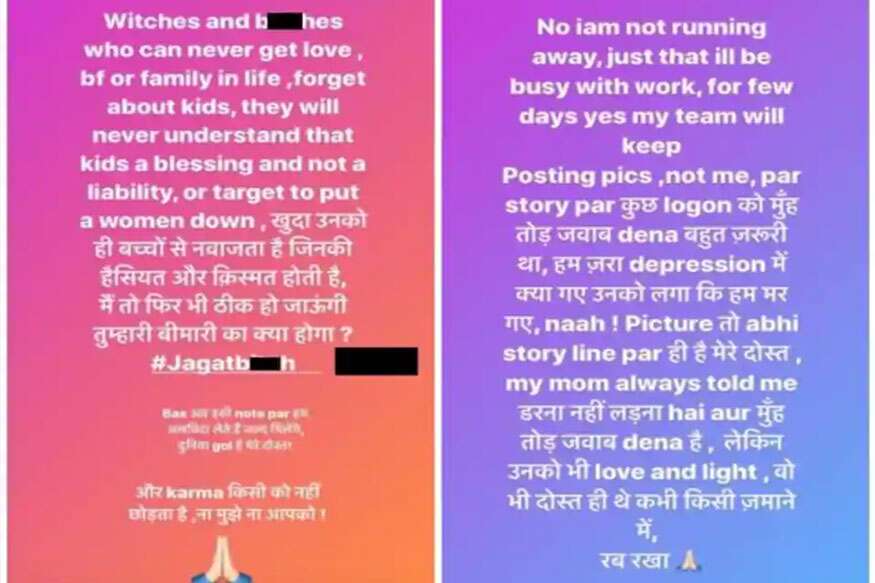 After posting the story the actress eventually deleted her Instagram.

Chahatt has been married twice but unfortunately, neither of her marriages worked. She has two daughters, Zohar and Amaira, from her second marriage and she is single-handedly raising them.

On the work front, Chahatt was last seen in ‘Prassthanam’. She also works in Zee TV’s ‘Khana Khazana’.

Check out our interaction with the actress below:

Also Read: Chahatt Khanna on her equation with Mika Singh: We are NOT using each other for publicity