Anusha Dandekar fumes in anger over break up reports with Karan Kundrra; blasts the reporter for the story

Anusha Dandekar fumes in anger over break up reports with Karan Kundrra; blasts the reporter for the story

Falling in love is not difficult. Staying in the relationship and making it work, is what the real challenge is all about. Karan Kundrra and Anusha Dandekar have been dating each other for more than four years now. But looks like now they are heading for splitsville. That’s the latest buzz in grapevine and brought to you a few days back. Now, we see that Anusha has hit back at the media for reporting the news. She is fuming with anger and has also slammed the reporter on her Instagram stories.

It all began with a report on SpotboyE which stated that the couple was facing problems in their relationship, so they have now decided to part ways. However, Anusha wasn’t someone who would not speak out. Even though she didn’t deny the breakup report anywhere, she was furious that the media decided to carry the story in such striving times of the Coronavirus crisis.

Taking to her Insta stories, she wrote, “Just one more thing before I go sleep, I know I am being way more vocal than usual but I am tired of people thinking my silence and kindness is weakness. I know who has gone to the press with this so-called information. It’s sad that even in this devastating world crisis, you wanted to make a spectacle of someone’s life. I hope you realise how you are choosing to live your life. You are not my friend but the question is, are you a friend of anyone’s, or just forever self-serving. Hope you find your peace.” 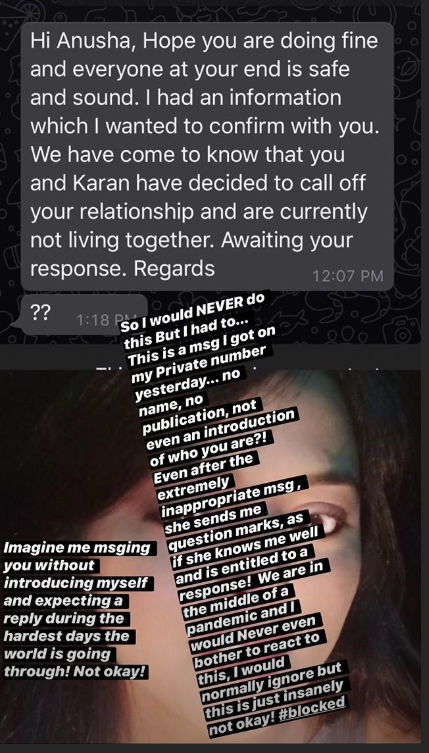 Not only this, but Anusha also went ahead to slam the reporter for running the story despite not getting a revert from Anusha. Well, Anusha not only outed the message with the reporter had sent but also gave a glimpse of her image taking it from her WhatsApp DP. Quite sad, we must say!

Let’s wait and watch as to when Anusha decides to speak out on her own about her break up with Karan Kundrra. After all, in the whole outburst, she didn’t even for once mention that the stories about the split were untrue. So, stay hooked onto Bollywood Bubble as we get you more and more stories from the world of films, TV and digital.