It’s still not sinking in that Sushant Singh Rajput is no more. The actor’s death has sent a shockwave amongst his fans and followers. Several theories surrounding the cause of

It’s still not sinking in that Sushant Singh Rajput is no more. The actor’s death has sent a shockwave amongst his fans and followers. Several theories surrounding the cause of his death has been doing the rounds of the internet. While some reports claim ‘professional rivalry’ behind the actor’s death others state that Bollywood’s biggies were ganging up against him since he was an outsider.

Now, Maharastra housing minister Jitendra Awhad has sought a detailed enquiry in Sushant Singh Rajput’s death. The minister also said that the cartel story is scary and no newcomer should ever go through such torture.

Taking to the microblogging site Twitter, Jitendra shared a series of tweets. In those tweets, he raised several questions regarding Sushant’s death. In one of his posts, he wrote, “In my personal capacity I think that a detailed enquiry should be done in #SushantSinghRajput suicide case. We have lost an upcoming talented actor who came from Patna to make place for himself in #Bollywood. The cartel story is scary and no newcomer should go thru such torture (sic).”

He further said that he will be meeting Home Minister Anil Deshmukh and demand an enquiry so that the truth is out in the public domain. “I m personally meeting home minister @AnilDeshmukhNCP and demanding a enquiry and the truth should b in public domain. We’re his movies stopped ? We’re his movies banned? Was he forcibly removed from certain movies ? Many such questions are doing rounds and leading to suspicion,” the minister wrote. 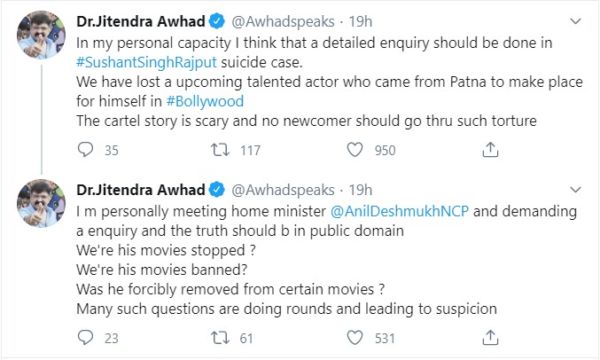 While Anil Deshmukh had tweeted that Mumbai Police will probe ‘professional rivalry’ angle into the actor’s death.

While the post mortem report says actor @itsSSR committed suicide by hanging himself, there are media reports that he allegedly suffered from clinical depression because of professional rivalry. @MumbaiPolice will probe this angle too.

Sushant hanged himself to death on June 14. Mumbai Police will interrogate everyone who was close to the actor and especially the ones who have been in touch with him for the last 10 days prior to his death.

So far, Sushant’s rumoured girlfriend Rhea Chakraborty and casting director Mukesh Chhabra’s statement has been recorded by the Mumbai police.