The Fashionista of Bollywood Sonam Kapoor, has gone ahead  and done a photoshoot with Rohan Shrestha; in which she is seen shaving her face. Yes its true, and the gutsy girl is sure looking hot doing this.

Sonam is seen shaving her face with the  lathery cream spread over her cheeks and neck and she is seen wielding the razor too with smoky eyes and disarray hair. Sonam truly has given a sensuous look to such a manly task. This proves that she has the ability to carry off almost anything.

The funny part came later when photographer Rohan Shrestha tweeted the picture and soon internet was abuzz with a series of jokes on Sonam’s father Anil Kapoor (for his hairy body). 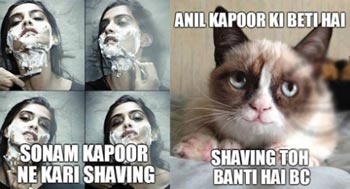