Kangana Ranaut spills the beans on her affair with Hrithik Roshan; compares it to SSR-Sara Ali Khan’s relationship

Kangana Ranaut spills the beans on her affair with Hrithik Roshan; compares it to SSR-Sara Ali Khan's relationship

Kangana Ranaut never leaves any chance to make any given topic or issue about her. She has been constantly using Sushant Singh Rajput’s death to further her own views on ‘movie mafia’ and nepotism in Bollywood. After taking a dig at Deepika Padukone over her ‘depression ka dhanda’, the ‘Panga’ actress now targeted Sara Ali Khan for her alleged affair with Sushant.

Kangana went on to say that ‘fancy nepotism kids show dreams to vulnerable outsiders’. She didn’t stop at that and even dragged Hrithik Roshan into the picture by opening up about their alleged affair.

Earlier today we came across reports of Sushant’s close friend Samuel Haokip claiming that Sara dumped Sushant after ‘Sonchiriya’ tanked at the box-office. Now commenting on the same reports, team Kangana took to their Twitter account and wrote, “News of SSR and Sara affair was all over the media, apparently they were even sharing a room during their outdoor, why these fancy Nepotism kids show dreams to vulnerable outsiders and then publicly dump them? No wonder he fell for a vulture post that(sic).” 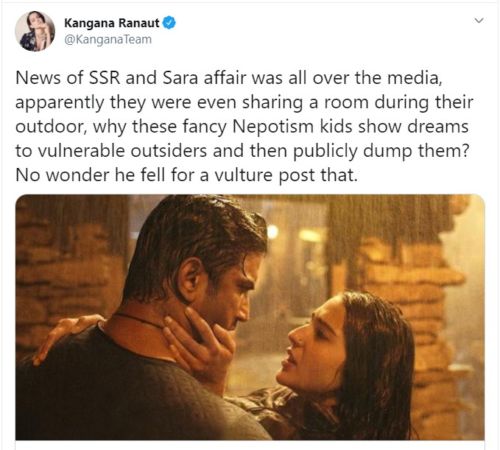 When a user posted that the break-up with Sara affected Sushant a lot, Kangana opened up about her relationship with Hrithik. Her team tweeted, “I believe Sara must’ve loved him he wasn’t a fool to fall for a girl whose affection isn’t genuine but she must have been under pressure, what I shared with Hrithik was genuine at that point I still have no doubts about it why suddenly he became so hostile is still a mystery to me (sic).” 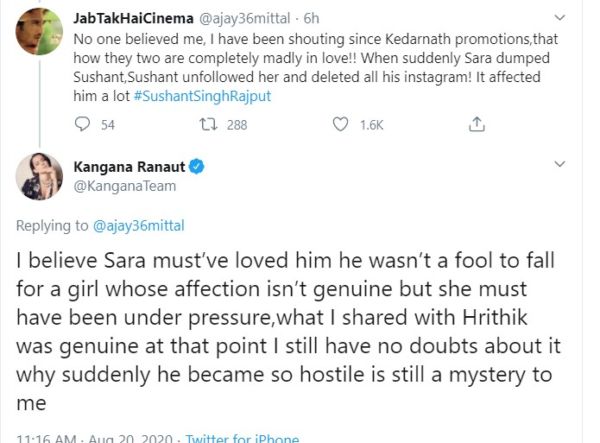 Saif Ali Khan and Amrita Singh’s daughter Sara Ali Khan had made her Bollywood debut opposite Sushant in Abhishek Kapoor’s ‘Kedarnath’. The film released in 2018 and was received well by the audience and the critics alike.