Films releasing on OTT platforms is soon turning out to be the new thing. Many films like ‘Ghoomketu’ and ‘Gulabo Sitabo’ are starting to take the digital route during this lockdown and not waiting for theatres to open for the movie’s theatrical release. There are also reports that ‘Laxmmi Bomb’ has finalised a deal and might also come out on digital during Eid. Now, we have got some more information about other films which are also in talks for having a digital release.

‘Ghoomketu’ is bought on by Zee 5, ‘Gulabo Sitabo’ has been bought on by Amazon Prime, ‘Laxmmi Bomb’ is almost finalised to get released on Hotstar. Now comes the other new names in the list.

Talking of Prime, apart from ‘Gulabo Sitabo’, we will also see Vidya Balan starrer ‘Shakuntala Devi’ release on it.

Films like ‘Indoo Ki Jawani’ and ‘Shiddat’ are yet in talks for a proper digital partner. It won’t be long before they as well zero in on a digital release. 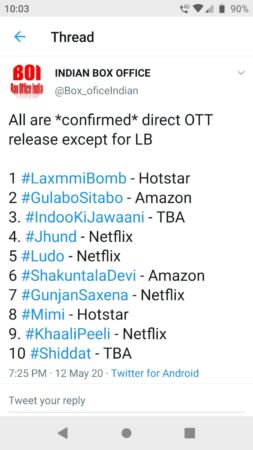 Let’s wait and watch which of these films get a release online, which the makers decide to hold on for a release in theatres after the Coronavirus crisis gets over.

Stay hooked onto Bollywood Bubble for more such interesting and exciting stories.

Sunny Leone stuns in black as she was spotted with

From Sonu Sood apologizing for sitting at the foot

Is Suhana Khan dating her childhood bestie and Ami

Kriti Sanon opens up on what type of guy she wants

Shilpa Shetty and family are back in the city afte

Shanaya Kapoor keeps her look all comfy as she was

Tara Sutaria looks every inch a diva as she was sp

Shah Rukh Khan yet again proves why he is the witt

Tusshar Kapoor talks about being judged 'too much'

Years come and go, only thing constant is Hrithik

The way she looks at the kids 🥰 #janhvikapoor #

Here’s a cute bts from Shehnaaz Gill’s next pr