‘Gulabo Sitabo’: Amitabh Bachchan’s look has an uncanny resemblance to this old man from Delhi

They say art imitates life and life imitates art. And that’s exactly how the cycle goes on forever. Amitabh Bachchan’s Mirza Sheikh character in Shoojit Sircar’s recently released satirical comedy ‘Gulabo Sitabo‘ is garnering a lot of praise from the audience and the critics alike. We all know that Big B is a legendary actor but it’s his transformation in ‘Gulabo Sitabo’ that has caught everyone’s fascination.

And guess what? We just came across pictures of an old man from Delhi who has an uncanny resemblance to Big B’s Mirza character. The resemblance is so on point that it seems like the veteran actor’s look has been inspired by the old man who was photographed by the Delhi-based blogger Mayank Austen Soofi.

On May 23, Blogger Mayank Austen Soofi, who goes by the handle @thedelhiwalla on Instagram, had pointed out the similarities between Big B’s first look from ‘Gulabo Sitabo’ and the old Delhi man whose portrait he had clicked back in 2019.

Taking to his Instagram handle, Mayank wrote, “OH DAMN, GEE! Actor Amitabh Bachchan’s “first look” from the forthcoming movie Gulabo Sitabo is exactly the replica of an Old Delhi man whose portrait I clicked and posted on my Insta in Jan last year—down to his scarf, beard, glasses! My portrait inspired banker Joe Thomas @instajoetom in Kerala’s Aleppey to turn it into a beautiful sketch (see in next slide) a few days later, which he was kind enough to share with me! In fact, he’s the one who just pointed out to me the movie man’s resemblance to the real man I’d snapped! #inspiration #gulabositabo #amitabhbachchan (sic).”

Several users applauded Mayank for his portrait. Interestingly several of them even pointed out that he should be given credit by the makers of the film. One of the users wrote, “The old Delhi man you photographed, has such a gentle, serene face. Will remind anyone of their grandfather ♥️ Also, they should credit you!” Whereas another user commented, “It’s not a resemblance but a copy. They did not get the kindness on the face of your portrait right though.” 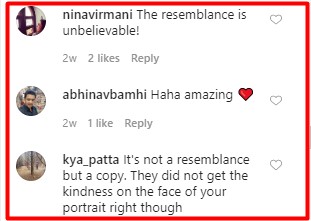 However, Shoojit Sircar in an interview with Scroll had said that his reference for Big B’s look was provided by cinematographer Avik Mukhopadhyay, a photorealistic pencil-art portrait of an old man by Russian artist Olga Larionova.

What do you guys have to say about these resemblances? Do let us know.

Also Read: ‘Gulabo Sitabo’ Movie Review: Amitabh Bachchan-Ayushmann Khurrana’s social satire is shaky in its foundation but leaves you with an unexpected twist