Ranveer Singh and Deepika Padukone, after dating for six years, tied the knot in Italy as per Konkani and Sindhi traditions on November 14 and 15. The much in love

Ranveer Singh and Deepika Padukone, after dating for six years, tied the knot in Italy as per Konkani and Sindhi traditions on November 14 and 15. The much in love couple later threw grand receptions for their family and friends in Bengaluru and Mumbai respectively. Ranveer and Deepika have been giving major couple goals to their fans ever since. The best example was the recently concluded Star Screen Awards night when the actor went on to receive the Best Actor Award for ‘Padmaavat’.

Ranveer won the award and Deepika Padukone was seen teary-eyed and the picture of her getting emotional at the event went viral on social media.

Check out the image shared by Ranveer Singh here: 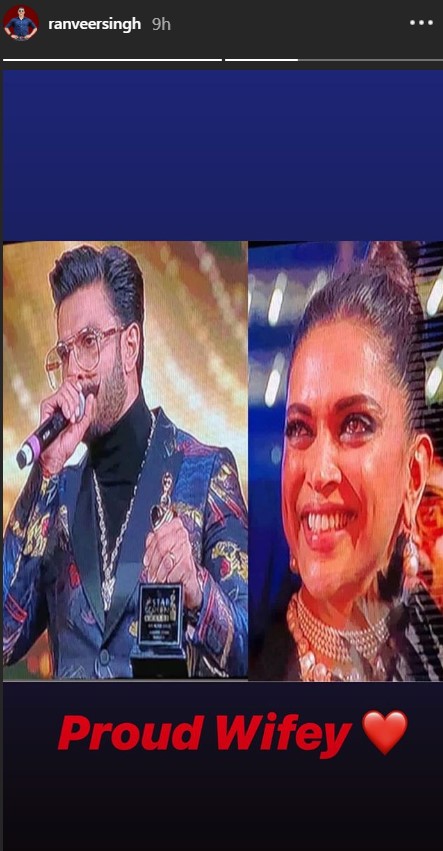 Ranveer in a media meet has revealed the reason Deepika got emotional. He said, “Receiving the Best Actor award was a magical moment for me. But more than me, it was Deepika who became quite emotional as this was a special moment. Though I have been nominated a number of times, I’ve never received it. I had always dreamt that one day, I will get an award with Deepika sitting beside me and as soon as they announce my name, I will turn around give a kiss to my lady and head on to receive the award and that happened last night (Star Screen Awards 2018) and it was magical.”

He further added “I have been in this industry for eight years and out of which, I have been in a relationship with Deepika for six years. She’s a large part of my growth and my evolution. She’s a large part of the reason I am able to achieve all the things I have achieved in the past six years because she kept me grounded and centered. She was my support through it all, especially through Khilji because that was a very difficult year for me, a very difficult character, one that I was really struggling through. For her to witness that and then to witness this (him winning the award) was a pretty emotional experience, it was magical.”

On the work front, Ranveer Singh will next be seen in Rohit Shetty’s ‘Simmba’. The action dhamaka also features Sara Ali Khan and will release on 28 December 2018.