It has been a week Priyanka Chopra and Nick Jonas got married at Umaid Bhawan Palace, Jodhpur. To pay respect to each other cultures and beliefs, the couple exchanged vows

It has been a week Priyanka Chopra and Nick Jonas got married at Umaid Bhawan Palace, Jodhpur. To pay respect to each other cultures and beliefs, the couple exchanged vows as per both Christian and Hindu rituals. It was such a sight to behold to see the two families bonding with each other culture. Post the wedding, Priyanka and Nick treated their fans with the pictures of their wedding ceremonies. Now, every single day we see pictures of Priyanka-Nick’s wedding surfacing on the internet.

The Christian wedding was on December 1 and the Hindu wedding took place on December 2. Today, taking to her Instagram handle, Priyanka shared two wedding pictures where she and Nick can be seen posing with their respective families.

She shared a picture from the Christian wedding (above) where we see the Chopras and Jonas in one frame. On PeeCee’s left, her mom Madhu Chopra and brother Siddharth Chopra is seen and on Nick’s right, the entire Jonas’ family is seen. 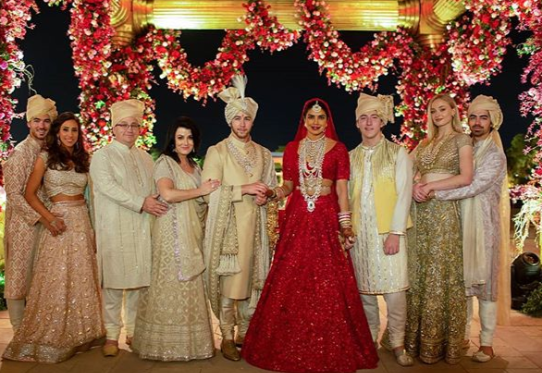 She also shared a picture from her Hindu wedding, which you can see above. On the left, we see Nick’s mother Denise Jonas, then his father Paul Kevin Jonas, followed by Nick’s elder brother Kevin Jonas and his wife Danielle. On the right, we see Nick’s younger brother Frankie Jonas and Joe Jonas with his fiancee Sophie Turner. In the post, she thanked designer Ralph Lauren and Sabyasachi Mukherjee who designed their wedding ensembles. Also, she thanked Abu Jani and Sandeep Khosla for designing the settings of their wedding ceremonies.

Reportedly, Priyanka and Nick will be hosting the Mumbai reception on December 20 for PeeCee’s Bollywood friends.

Also Read: THIS is how Mama Jonas welcomed daughter-in-law Priyanka to the Jonas’ family