Desi girl Priyanka Chopra is in one of the best phases of her life. She is gearing up for her wedding to singer-songwriter beau Nick Jonas. Just a few days back,

Desi girl Priyanka Chopra is in one of the best phases of her life. She is gearing up for her wedding to singer-songwriter beau Nick Jonas. Just a few days back, the actress had a blast at her bridal shower hosted by her girl gang, and now she has given us a sneak peek into her bachelorette party.

Captioning the picture as “#BacheloretteVibes”, Priyanka shared an image of beautiful roses with few balloons and a bottle of champagne in the background. Looks like Priyanka is totally enjoying her last few days as a bachelorette. 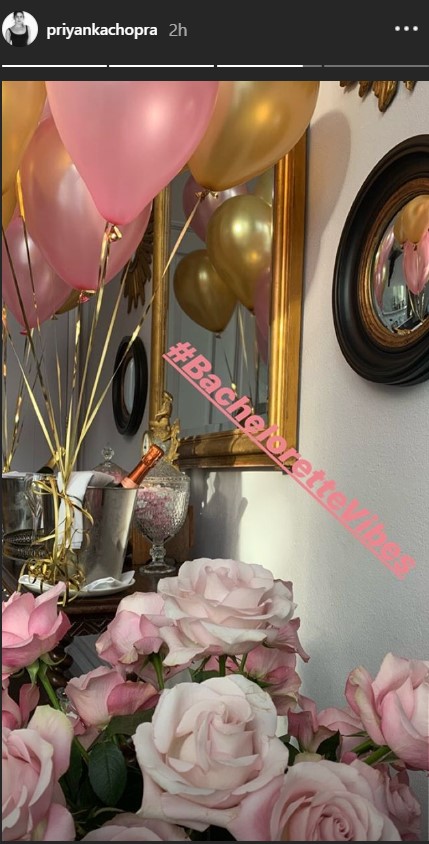 She even posted a picture of herself smiling broadly alongside the caption, ‘#BacheloretteVibes”

PeeCee’s mother Madhu Chopra was also present at the shower.

After seeing these fun-filled pictures from her bridal shower, we just can’t wait to lay our hands on photos from her bachelorette party.

Though the ‘Quantico’ actress is yet to make an announcement about her wedding date and venue, the buzz suggests that she will be taking the plunge on November 29 at the regal Mehrangarh fort in Jodhpur.

Talking about her wedding, a source was quoted saying in Mumbai Mirror as, “Priyanka will be wearing a Ralph Lauren creation for one of her functions. While only close friends and relatives of the bride are invited to the private function, over 100 guests are expected to attend from the groom’s side, who will be introduced to Indian customs during the ceremony.”

This sounds like Priyanka’s wedding is not going to be anything less than a fairy-tale.

So aren’t you guys excited?