Indian skipper Virat Kohli is in form these days. He has broken Sachin Tendulkar’s record as the fastest batsman to score 10,000 runs in ODI cricket. He has scored 10,000 ODI

Indian skipper Virat Kohli is in form these days. He has broken Sachin Tendulkar’s record as the fastest batsman to score 10,000 runs in ODI cricket. He has scored 10,000 ODI runs in 205 innings, beating the 17-year-old Sachin who made 10,000 runs in 259 innings. Kohli is now the fifth Indian and 13th batsman overall to reach this position in ODI. Virat’s better half Anushka Sharma, who leaves no occasion to cheer for her hubby, showered him with a heap of praises.

Taking to her social media handle, Anushka shared a series of Instagram stories. She posted a picture on her Instagram saying, “What a man!” with a heart emoji. That’s indeed a proud moment not only for Virat’s fans, but Anushka as well. 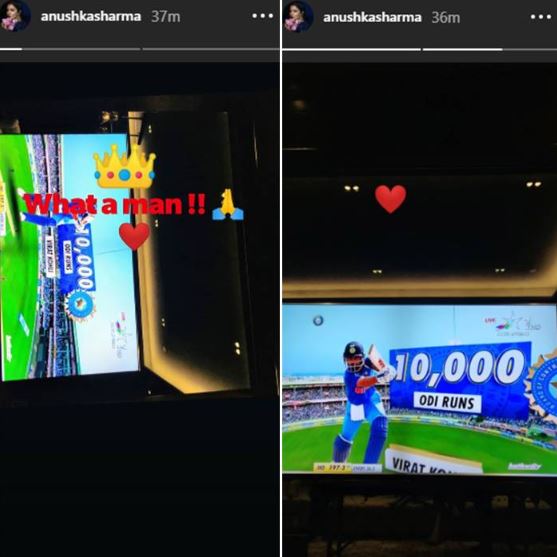 Even Virat doesn’t leave any opportunity when it comes to praising Anushka. As Anushka received lots of appreciation for her recent-release ‘Sui Dhaaga’, Virat Kohli too tweeted appreciating his wifey’s work. He wrote, “Saw @SuiDhaagaFilm for the second time last night and I loved it more than the first time. What an emotional rollercoaster with brilliant performances by the entire cast.”

In the past, many have held Anushka responsible for Virat’s poor performance. But the couple never paid heed to the criticisms. Today, Virat has proved to the entire world that Anushka is not the reason for his bad performance. We hope this will shut down the trollers in the future.