‘India’s Got Talent’: Rumored couple Malaika and Arjun hold hands and dance together

Arjun Kapoor and  Malaika Arora are rumoured to be dating after the latter’s divorce to Arbaaz Khan. In fact, reports suggested that Arjun Kapoor was the reason behind the separation of Malaika and

Arjun Kapoor and  Malaika Arora are rumoured to be dating after the latter’s divorce to Arbaaz Khan. In fact, reports suggested that Arjun Kapoor was the reason behind the separation of Malaika and Arbaaz. The alleged couple were earlier spotted together at parties, events, restaurants, etc. together. Though the duo has never opened up on their relationship and has just called each other good friends, their gestures have some other story to tell.

Recently they grabbed the eyeballs again after Arjun and Parineeti Chopra went to promote their film ‘Namaste England’ on the sets of reality show ‘India’s Got Talent’, which is co-judged by Karan Johar and Kirron Kher and Malaika Arora. As per a report in DNA on the show instead of sitting next to his film’s heroine, Parineeti Chopra, Arjun chose to sit beside Malaika. The two did turn a lot of heads on the stage. After the performance of a twerk dancer, show hosts Rithvik Dhanjani and Bharti Singh invited Arjun and Malaika on the stage to shake a leg with the contestant.

We can see Karan, Parineeti and Kirron Kher applauding the performance of Arjun and Malaika.

Recently, Arjun and Malaika attended the Lakme Fashion Week, and there too both of them sat side by side on the front row of the event.  A few days later they were papped arriving in the same car for Sandeep Khosla’s house party. 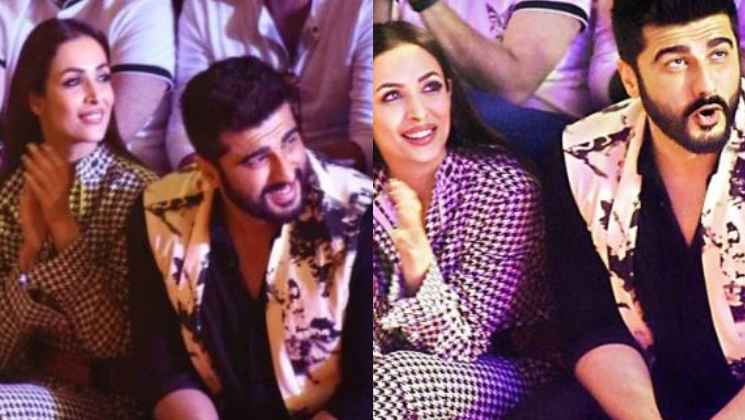 Earlier Arjun and Malaika maintained silence on their relationship but now their equation is clear from their gestures. Earlier Deccan Chronicle quoted a source saying that Malaika is no longer keen to hide her proximity to Arjun. “When she was with Arbaaz, the Khan family, especially Salman, made their disapproval very clear. But now that she has broken away from Arbaaz, she sees no reason to be coy about her closeness to Arjun. Besides, Arbaaz is also seeing someone else now,” added the source.

Also a few days back our exclusive sources told us that Arjun and Malaika will soon be making their relationship official.

Also Read: Parineeti Chopra on Priyanka and Nick: She is full of life and crazy and he is the anchor in her life