Actress Richa Chadha has been receiving death threats and rape threats on the social media. The Bholi Punjaban had tweeted, “Yes, Hinduism is indeed in danger in India. Hinduism faces

Actress Richa Chadha has been receiving death threats and rape threats on the social media. The Bholi Punjaban had tweeted, “Yes, Hinduism is indeed in danger in India. Hinduism faces a threat from Hindutva supporters. Save your religion and get rid of these supporters of Hindutva. Issued in public interest.”

The tweet was posted when a riot took place at Aligarh Muslim University in Uttar Pradesh. It was allegedly over a portrait of Pakistan’s founder Muhammad Ali Jinnah. Richa was trolled for her stand by many. However, one of the haters went ahead and threatened the actress with rape and murder. 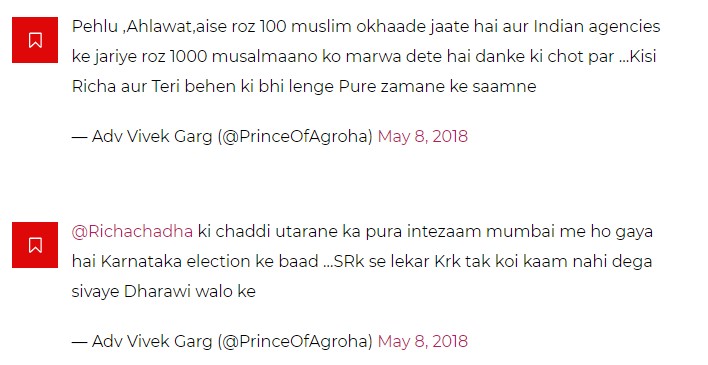 The actress soon slammed the user and tweeted,

You must report this. Twitter needs to take responsibility for this. They cannot provide a platform to people who openly threaten to rape and maim women.

Top management at Twitter must regroup and decide what they’d like their service to be remembered for.
If it’s for good, then they need to get smarter in its regulation. Rape and death threats cannot be allowed or go unpunished. @twitter @TwitterIndia

Scumbags! @TwitterIndia should do something about such openly threatening tweets!
Riches.. u define superwoman for me! 😘🤗 @RichaChadha https://t.co/J5Fy98AEvG

The kind of abuse and slander @RichaChadha is facing on #Twitter amounts to harassment quite clearly.. @TwitterIndia @Twitter u wanna take some action and block these accounts that clearly violate ur community standards! Shame on this filth and u stay strong Richa! ❤️ pic.twitter.com/DfTckAE4U2