Actress Sonam Kapoor tied the knot with beau Anand Ahuja on May 8. The wedding was attended by industry’s most sought after celebrities like Amitabh Bachchan, Ranbir Kapoor, Alia Bhatt,

Soon after the wedding, Sonam changed her Twitter as well as Instagram usernames to ‘Sonam K Ahuja’ and ‘sonamkapoorahuja’ respectively. She also inaugurated her new social media handle – Sonam K Ahuja – with her first ever picture with husband Anand Ahuja as a married couple. She captioned the photograph with the same hashtag members of her family have been using for her wedding, #EverydayPhenomenal.

Soon hubby Anand, coordinated with a similar picture of their wedding where he is seen reciprocating to the kiss from his wife.

Hubby Anand is one smitten man as he shared another picture on Instagram and wrote: “pure hearts rule … #everydayphenomenal,” with a heart emoticon.

Check out the picture here:

The picture shared by Anand is from the couple’s reception party where their shoes are in focus. Cynosure of all eyes is Anand’s Nike and Sonam’s Jimmy Choo which the couple sported on their wedding day.(Also Read: Was Ranveer Singh feeling forlorn at Sonam Kapoor’s wedding reception?)

The picture soon got a response from Sonam, who wrote: ” Our dancing @jimmychoo @nike”. 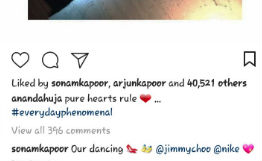 The couple will have a delayed honeymoon all thanks to the Diva’s busy schedule. She will be attending the Cannes Film Festival on May 14 and 15. Following it she will next gear up for the release of ‘Veere Di Wedding’ that is scheduled for June 1 release.