HOT NEWS: Check out the ensemble cast of ‘Housefull 4’!

After announcing the 4th installment in the ‘Housefull’ franchise, the makers have finally unveiled the cast of the same. [image_source id=”702573″ align=”alignnone” width=”410″] [/image_source] The film will feature Akshay Kumar,

After announcing the 4th installment in the ‘Housefull’ franchise, the makers have finally unveiled the cast of the same. 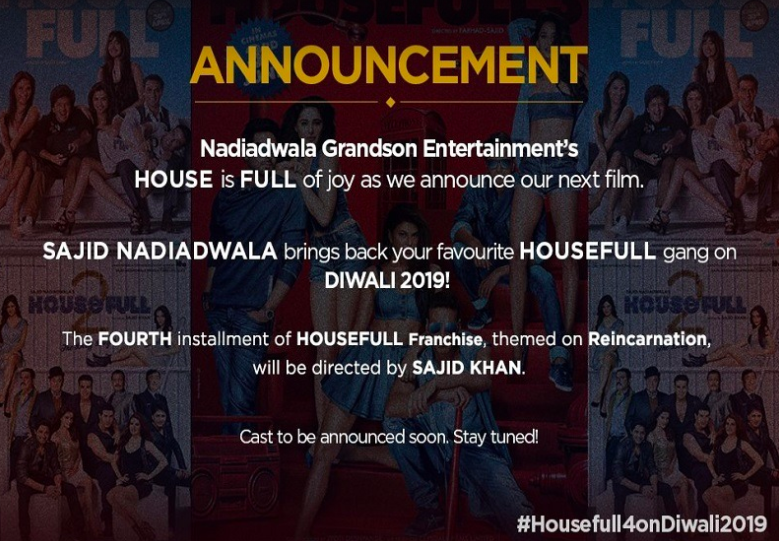 The film will feature Akshay Kumar, Bobby Deol, Riteish, Kriti Sanon and Pooja Hegde in lead roles. After ‘Judwaa 2’ and ‘Baaghi 2’, Sajid Nadiadwala and Fox Star Studios will collaborate for the third time for a franchise.

According to reports, ‘Housefull 4’ will have the best VFX team from London.  The VFX of the film will be something which has never been seen before and the producers have allocated a huge budget for the same. Double Negative is a visual effects company, who have worked on films like ‘Inception’, ‘Interstellar’, ‘Blade Runner 2049’ and ‘Dunkirk’. (Also Read: Confirmed! Kriti Sanon becomes the first female lead to join ‘Housefull 4’ team)

The film is all set to hit theaters on Diwali 2019.