This photo of Anil Kapoor & Madhuri Dixit makes it impossible to wait for ‘Total Dhamaal’!

Anil Kapoor and Madhuri Dixit are reuniting for ‘Total Dhamaal’ after 18 years. A recent picture of the duo has taken the social media by storm. In the photo, one

Madhuri Dixit is seen wearing a shimmery sequence red dress whereas Anil Kapoor is seen sporting a green formal outfit. They both are seen complimenting each other in the one! (Also Read: Throwback Thursday: When Sanjay Dutt confessed his wish to marry Madhuri Dixit)

Take a look at the photo here: 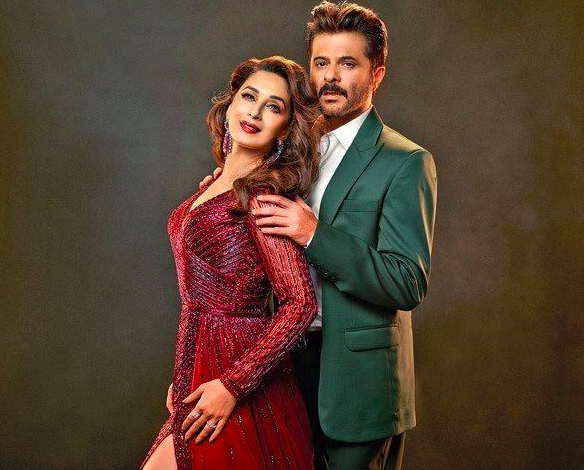 According to a report of Pune Mirror, the Jodi who is seen all dressed up in this picture will be simply dressed throughout the movie. A source told the daily, “The beauty lies in their evergreen good looks.” But does it really matter, because we are sure, you all are eagerly waiting to see this duo wooing us one the big screen. The source further added, “Madhuri pulled off the jhatkas and matkas with effortless ease, leaving everyone including her leading man mesmerized. When Ajay (Devgn), Arshad (Warsi), Riteish (Deshmukh), Javed (Jafri) and Sanjay Mishra joined them, it upped the fun and what was supposed to be three days of work was wrapped up in two.”

Apparently, Total Dhamaal is directed by Indra Kumar who had helmed Beta (1992) that gave us the Anil-Madhuri number ‘Dhak Dhak Karne Laga’. Earlier, Indra Kumar had shared a photo before he commenced the shoot of the film.

Two of my favourites! Absolutely love them on the screen & have the privilege of working with them again for #TotalDhamaal. All set for some super fun & some awesome work! Welcome to the squad @AnilKapoor & @MadhuriDixit. @foxstarhindi pic.twitter.com/CgwvpYSgpt

Total Dhamaal will hit the screens on December 7, 2018.