In the latest news coming in on TV comedian Kapil Sharma, the actor has registered a police complaint against his former girlfriend and ‘Comedy Nights With Kapil’ creative director Preeti

In the latest news coming in on TV comedian Kapil Sharma, the actor has registered a police complaint against his former girlfriend and ‘Comedy Nights With Kapil’ creative director Preeti Simoes, her sister Neeti Simoes and a senior entertainment journalist Vicky Lalwani.

Before Kapil filed a complaint he seemed to be in a mood not only on Twitter but also chose to give a call to the concerned journalist and throw choicest slangs at him, accusing him of publishing negative articles on him relentlessly.

Hear the conversation below:

Kapil’s language and expressions as appearing in the conversation have been drawing massive flack from all corners recently.

Yesterday, as it appeared rather sudden and surprising, Kapil hurled virtual abuses at the same journalist and his publication. 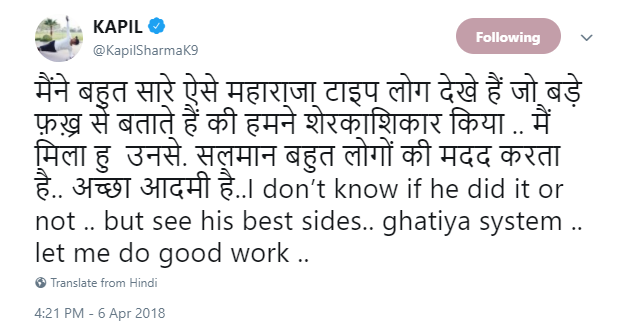 What started as he showing support to Salman Khan who’s been sentenced to 5 years in jail as per verdict of the 1998 Blackbuck poaching case, took a rather bizarre turn. 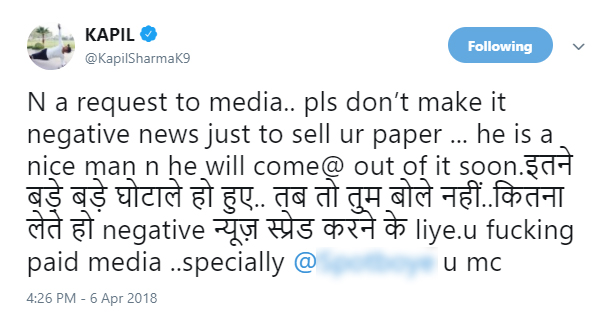 We were quite expecting a ‘hacked’ story, which came in no time.

But no, his account wasn’t hacked and he was in no mood to back off as well. 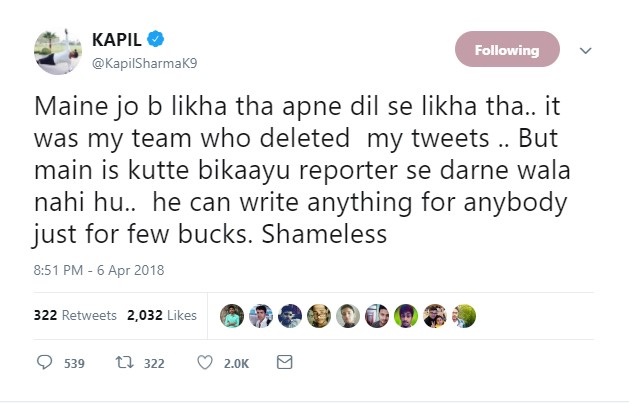 Last year while promoting his second film ‘Firangi’ Kapil had admitted to being an alcoholic and trying to get out of it. What was thought to be his second innings on TV with his recent show ‘Family Time with Kapil Sharma’ also witnessed him cancelling on stars yet again. With the news coming in on his show being pulled off the air by SONY TV we wonder what’s next!