Katrina Kaif who has stunned one and all with her classy and sophisticated taste in fashion, this time wants to steal something from another Bollywood actor’s wardrobe. The lady took

Katrina Kaif who has stunned one and all with her classy and sophisticated taste in fashion, this time wants to steal something from another Bollywood actor’s wardrobe. The lady took to her social media account and expressed the same.

Breaking your curiosity, we shall share here as to what exactly happened. Katrina took to Instagram and commented on a picture shared by Sonam Kapoor’s sister Rhea, where she demands an apparel piece, worn by none other than Rhea and Sonam’s brother and rising star, Harshvardhan Kapoor.

It so happened that the magical stylist behind Sonam, Rhea Kapoor recently took to her Instagram and shared a snap of brother Harshvardhan looking cool in a leather and suede jacket. And impressed by the actor’s sexy jacket was none other than Katrina Kaif. As she was one of the first people to comment on the picture saying, “I want that jacket”.

And yes as always, we have a proof. See below: 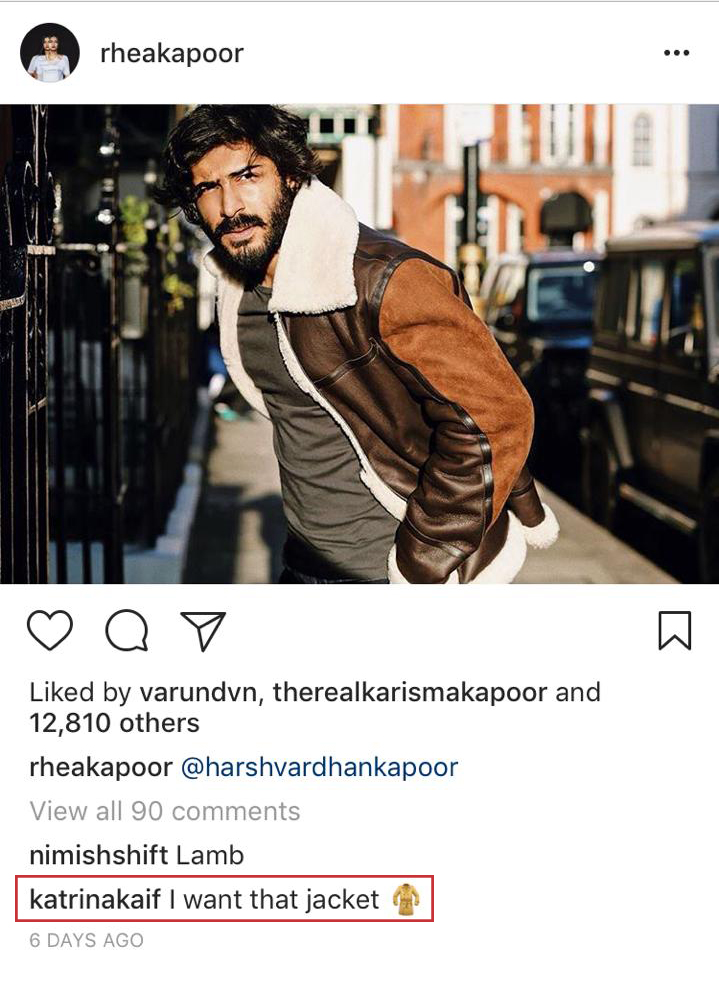 Seems like Katrina is very much awed by the jacket and also with the style aficionados of Rhea Kapoor. Are you listening Kapoor sisters, and the brother?

Lastly, on the work front, Katrina Kaif has two films in her kitty. One being with SRK, namely ‘Zero’ and the other opposite Aamir Khan, titled ‘Thugs of Hindostan’. (Also Read: Ishaan Khatter keeps brother Shahid Kapoor’s request, raps for us! WATCH VIDEO)