Stree: Shraddha Kapoor and Rajkummar Rao get statutory warning as they resume shoot

Shraddha Kapoor and Rajkummar Rao are gearing up to surprise everyone with ‘Stree’, the first horror comedy film of Bollywood. Both the stars are teaming up for the first time

Shraddha Kapoor and Rajkummar Rao are gearing up to surprise everyone with ‘Stree’, the first horror comedy film of Bollywood. Both the stars are teaming up for the first time and recently have kicked off shooting another schedule of the movie in Bhopal. But much to everyone’s surprise, they were welcomed with a statutory warning. Yes! You read that right. That too, a spooky one!

As the production team was in Bhopal few days before the shoot started, few locals learnt about it and approached them to give a low down about the shooting spot. The locals were kind enough to tell them about the horrific stories that have taken place around that particular location and the precautionary measures to be taken. As a self measured precaution, producer Dinesh Vijan sent formal letters to the crew as the shoot is taking place in an area called ruins where a number of super natural incidents have taken place in the past. (Also Read: EXCLUSIVE: Rajkummar Rao walks out of Nitesh Tiwari’s untitled film because of Sushant? Deets Inside)

Dinesh Vijan said, “Okay let me be honest. We wanted to get as legit as possible and so we thought, ‘Hey why not shoot in what people refer to as a haunted place?’ And so a location was chosen based on a few rumours floating around. Gradually the rumours started becoming first person accounts of inexplicable incidents. And as we reach our final leg of this bizarre journey, we must admit that we have been inundated with so many stories by the locals. Stories that range from terrifying to hilarious!”

“I thank everyone in my cast and crew for being supportive of the instructions that we have asked you to abide by. Fact or fiction, we must always appreciate and respect the beliefs of others especially when they open their doors and enable us to tell their stories,” added the producer.

Have a look at this formal letter issued to the cast and crew of ‘Stree’ here: 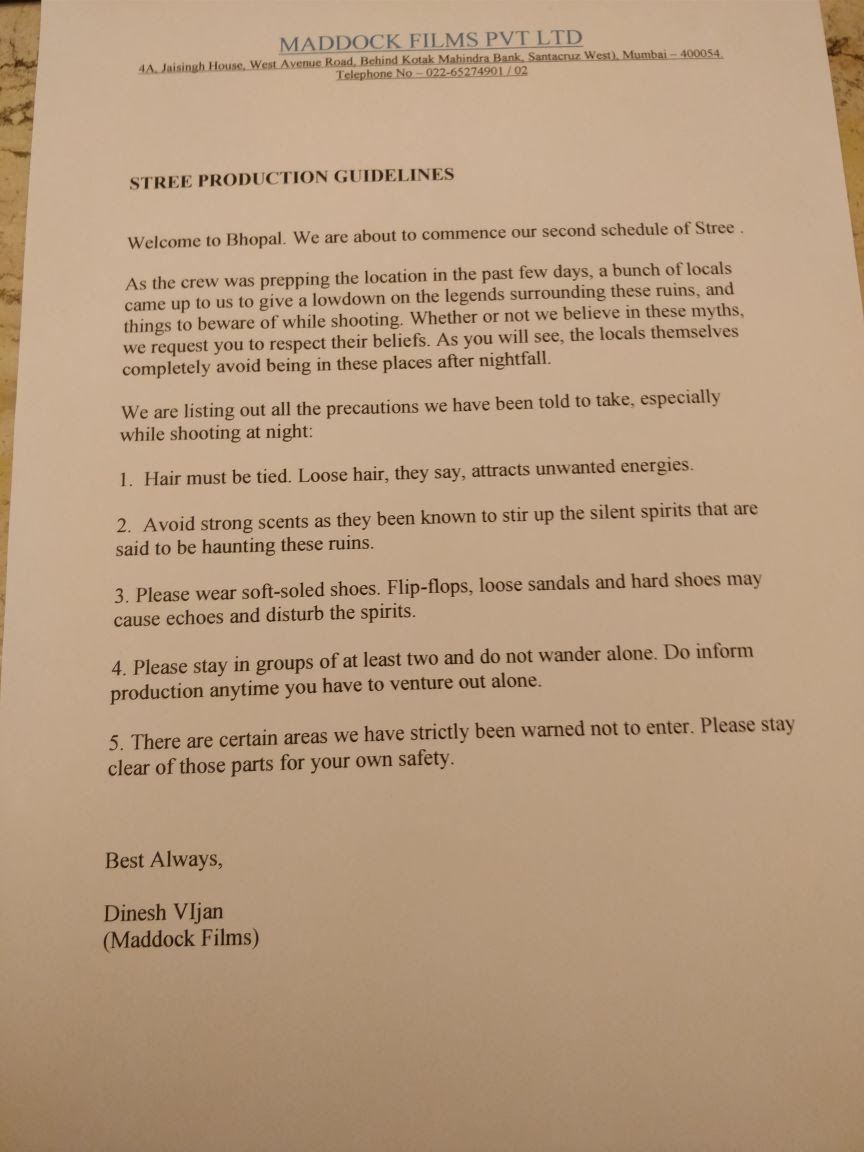 Led by director Amar Kaushik, the film’s team will continue shooting in Chanderi after they wrap up in Bhopal.