Zero: Shah Rukh Khan’s in a sleepy mood as Katrina pulls him out of bed early

Actors Shah Rukh Khan and Katrina Kaif have been shooting for their upcoming flick ‘Zero’ now. The two who have worked previously in the movie ‘Jab Tak Hai Jaan’ are

Actors Shah Rukh Khan and Katrina Kaif have been shooting for their upcoming flick ‘Zero’ now. The two who have worked previously in the movie ‘Jab Tak Hai Jaan’ are having a good time collaborating on this project as is evident from their pictures of the sets. 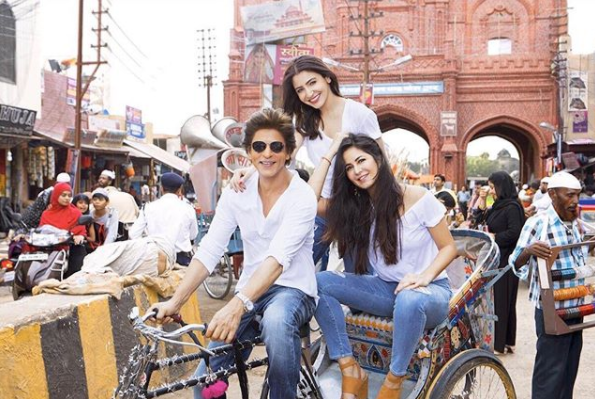 Now, SRK has shared another interesting picture in which he seems to be in a sleepy state of mind with his eyes closed as his co-star Katrina strikes an irritated pose and directed Aanand L Rai looks on with a smile. While we know that the actor is just pretending to be asleep, the caption for the post made it all the more fun. He wrote, “When the company is sooo scintillating & exciting that u can’t keep ur eyes open! Serves them right for calling me to early morning shoots for #Zero ( Pic courtesy: @katrinakaif my media manager )”

So yeah, Katrina has turned his media manager and the actor who is known to be a late riser has been pulled out of bed for an early morning shoot. (Also Read: Zero: The SRK-starrer to be Sridevi’s last big screen appearance)

Talking of the movie, it also stars Anushka Sharma in an important role. However, until now, only SRK’s character details have been known to all. The actor plays a dwarf in the movie. Helmed by Aanand L Rai, ‘Zero’ is slated to release on Dec 21, 2018.