WATCH: When little Janhvi Kapoor said Boney and Sridevi’s was a match made in heaven

They say that marriages are made in heaven and well, Sridevi and Boney Kapoor made up for a perfect example of it. They had their share of tough times and

They say that marriages are made in heaven and well, Sridevi and Boney Kapoor made up for a perfect example of it. They had their share of tough times and faced difficulties while getting married, but their true love stood strong against all the odds. Today Sridevi’s untimely demise has left everyone shocked especially her near and dear ones.

Remembering the good time the actress had spent with her family, we came across an old video where we could see her daughter Janhvi Kapoor saying that she feels her parents match was surely a one which was made in heaven. (Also Check: WATCH: Sridevi’s residence flocked with fans as they await their star’s last arrival) 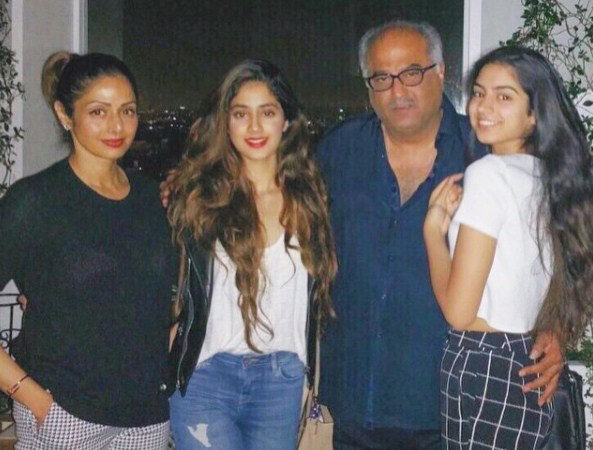 It was in the year 2009 when Boney Kapoor and Sridevi had arrived as guests on superstar Salman Khan’s reality game show ‘10 Ka Dum’. The couple was here for the promotions of their film ‘Wanted’ which featured Salman playing the lead role. Along with them, the film’s director Prabhudheva and actress Ayesha Takia were also present as guests on this show. Certainly, what added more beauty to this promotional episode was the presence of Sridevi’s both daughters Janhvi and Khushi, who were just 12 and 9 years respectively at that time.

While Sridevi and Boney were playing the game, a question came to them that how many percent of Indians believe that marriages are made in heaven. As the couple was thinking about what range they should lock their answer (as per the game’s format), Salman asked Sridevi’s cute little daughters for their thoughts on the same. First Khushi replied, “I don’t know” and when the question was passed on to Janhvi, she answered, “I know mom’s and dad’s is made in heaven.” On hearing this reply, everyone applauded on Janhvi’s love seen for her parents.

Indeed, Boney and Sridevi’s pair was a match made in heaven, until today when this unfortunate tragedy has struck with the latter’s demise.

Talking about Janhvi Kapoor, currently she is gearing up to make her dream Bollywood debut with ‘Dhadak’.

Check out the episode when little Janhvi had said this cute thing about her parents match on ’10 ka Dum’ HERE.