Padmaavat: Ranveer says he is a monster as Khilji, and we agree

Just few days are left to experience the magic of filmmaker Sanjay Leela Bhansali’s epic period drama ‘Padmaavat’ on the big screen. Amidst several controversies around the release of this film, the lead

Just few days are left to experience the magic of filmmaker Sanjay Leela Bhansali’s epic period drama ‘Padmaavat’ on the big screen. Amidst several controversies around the release of this film, the lead stars Ranveer Singh, Shahid Kapoor and Deepika Padukone couldn’t promote it in full swing. But, ahead of its release, they all are excited and today Ranveer Singh aka the reel evil Alauddin Khilji has shared a picture where he is seen describing himself as a ‘Monster’. To support the claim, he has shared visuals of his character Khilji, and trust us, we do agree. 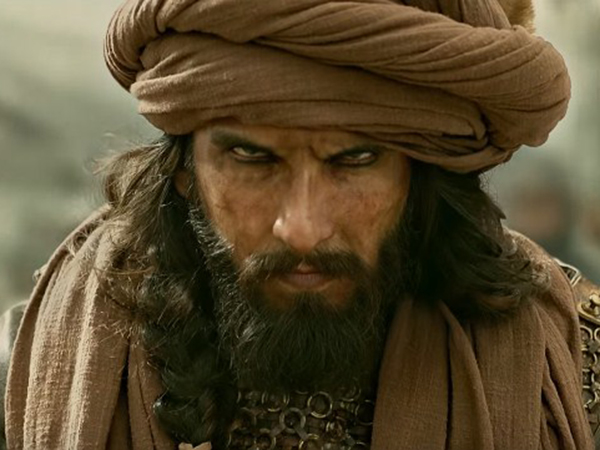 Ranveer took to his Twitter to share this picture captioning it, “MONSTER #Khilji #Padmaavat.” (Also Check: PICS: Ranveer ‘Khilji’ Singh is surely in a jovial mood before ‘Padmaavat’ releases this week)

Further, the actor shared the bookings details for the film which are open now. He tweeted, “#Padmaavat, in theatres on the 25th of January. Now also in 3D, IMAX 3D, Tamil & Telugu. Bookings open! Get your tickets NOW! #4DaysToPadmaavat.”

Have a look at these tweets shared by the actor below:

Recently, the makers unveiled a dialogue promo of his character from the film. We had seen him, and now we heard him, with that perfect accent, and the evilness inherent in him. It shook us and we can say it is going to be one ethereal experience, seeing him as Khilji.

Co-starring Deepika Padukone as Queen Padmavati and Shahid Kapoor as Maharawal Ratan Singh, ‘Padmaavat’ is slated to hit the screens on January 25.